It’s hard to believe that it was seven years ago that Wynnum broke away from Australia and set up its own republic. It’s fair to say that – compared to most declarations of independence – it was a fairly low key revolution, but seven years on it’s still here, with around a thousand official citizens (most of whom have their passport to hand), no less than seventy-five members of the aristocracy, and its fifth president – President Jullyan – currently in office. 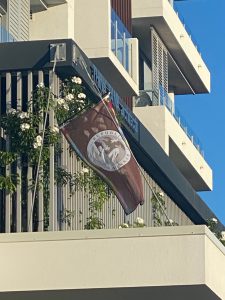 And if you look carefully next time you’re wandering around Wynnum you’ll spot the flag of the republic flying proudly from one of the government buildings (hint – you’ll need to look up to see it).

Independence Day often involves the president announcing various major planned projects in the republic and a (generally small) gathering of citizens to mark the day. As soon as we know what’s happening, we’ll let you know.

Wynnum Fringe – coming to a street near you very soon