First of all thank you very much to the ~200 people who took our brief survey a few months ago. The good news is that this makes the survey ‘statistically significant’ and so can be considered a good guide to what you, our ENEWS subscribers and – by implication – the people of Wynnum in general, want.

Rather than do a full analysis here, here are the screenshots of the results for you to peruse… 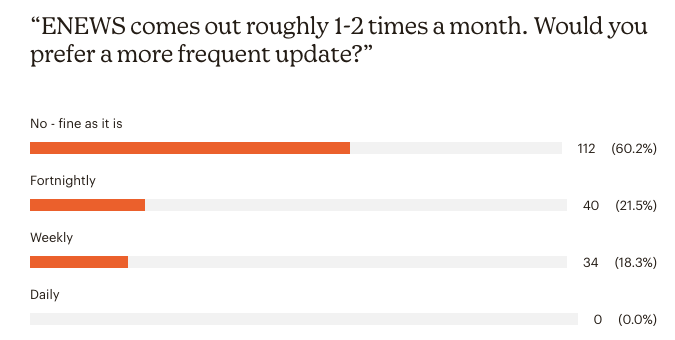 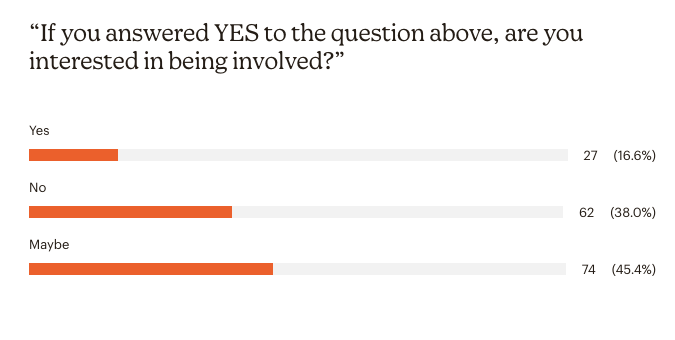 As you can see, there is support for WynnumCentral to add a few sections to the site, namely classified ads, a jobs board and property section, the most popular of which was a classifieds section (which would include a jobs section anyway). There is notably less support for ENEWS to publish more than one or two times per month, and the ‘no’s’ have it for a print edition, but only by a narrow margin! So no print edition for the time being.

What is interesting is that there is still support for the community garden project, despite the fact that we have not been able to progress this as quickly as we would have liked. However there is a little movement on this at the moment, hence our question about whether people would want to be actively involved in the community garden. We are actually encouraged that most people (76 people) said ‘maybe’ to this question, with 27 people saying yes and 62 no. That is, in our opinion, a good result.

Thank you also to those people who gave us a little more info in the survey and these comments and suggestions will be incorporated as far as possible in the final plan.

Wynnum Fringe – coming to a street near you very soon