This week is opening week for brand new nails and beauty salon CoCo Chelsea, which officially opens its doors today Wednesday 1st September in Edith Street, in a spot which was for a very long time a fruit and veg shop.

Although the salon may be new to Wynnum, it is being opened by a team who have a huge amount of experience in beauty – owner Vy come from three generations of family members working in the industry and has herself worked in the field for over fifteen years.

Vy grew up in the United States and moved to Australia when she was seventeen, initially living in Sydney and moving up to Queensland just in the past year. She had always dreamt of owning her own beauty salon, so when an opportunity came up in Wynnum she jumped at the chance. 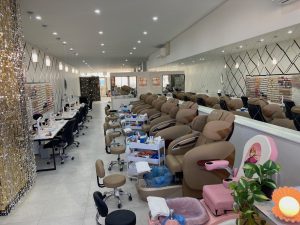 The new salon is equipped with the latest equipment, including six top of the range spa pedicure massage chairs imported from the US, featuring seat warmers and of course built-in massage functionality – including forearm massaging! There are also two smaller sized massage/pedicure chairs for younger guests!

The new salon also has a similar number of tables set up for nailcare and, in addition to manicures and pedicures also offers eyebrow tinting and extensions, ear and nose piercing and waxing – for men and women.

If you’d like to check out the new salon, it’s at 73 Edith Street and WynnumCentral understands they have a special opening offer for the first 100 customers – a free gift of OPI nail polish.

Quick moves in the street update