And Olof Prila – we all love an anagram…

PS If any amateur scientist does discover a new element we’d really encourage them not to do it at the end of March or beginning of April.

A Wynnum-based scientist has been able to synthesise a new element in the periodic table, beating teams of scientists around the world.

The last time a new element was discovered was in 2002 when Oganesson (atomic number 118) was synthesised at the joint Institute for Nuclear Research in Russia.

Although scientists had predicted that there may be an element 119, or, like Oganesson, at least capable of synthesis, it had not yet been ‘discovered’. Despite this the scientific community had already given it a name – Ununennium. 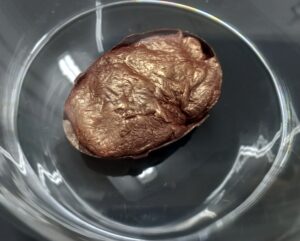 Amateur scientist Olof Prila has now shocked the scientific world by synthesising element 119 in the laboratory, and – due to the specific characteristics of the element – has suggested the official name should instead be Chocolatium (chemical symbol ‘Ch’).

Chocolatium, as predicted by scientists, behaves differently initially appearing “fluffier” and finally much denser, bronze in colour with a dark brown shell-like casing and – like its cousin Rubidium – hovers between liquid and solid state at between 12°C – 34°C – much like chocolate.

“I’m delighted that – with my small team at our lab – we have been able to synthesise Chocolatium using a technique which does not require the use of radioactive ion beams.” said Olof Prila. “In fact we have been able to produce the new element at temperatures close to room temperature, using other bombardment fuels, including very small particles of gold and silver. It’s a pity that Chocolatium decays as quickly as it does – it almost looks good enough to eat!”

Like many of the heavier elements, Chocolatium doesn’t last very long before it effectively disappears (generally within 10 minutes). Much like real chocolate.

The big question is – will there be more chocolate elements?